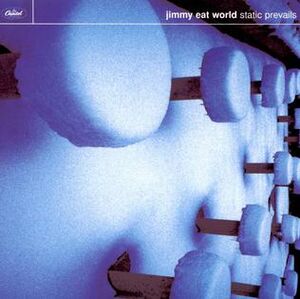 Episode IV leads us away from here

Don't expect to find what you're looking to

I can see the light leading away from you

We'll take a trip of no return to outer space

And swim in pools which keep us warm

Cleaned off the sand from off your feet

We'll dance off time to the songs we've never liked

And sing off-key, thinking it sounds all right

Episode IV leads us away from here

Don't expect to find what you're looking to

We'll take a trip of no return to outer space

And swim in pools which keep us warm

Cleaned off the sand from off your feet

We'll dance off time to the songs we've never liked

And sing off-key, thinking it sounds all right

(We'll show) and tell time to your friends

Jimmy Eat World released their self-titled debut studio album in 1994, through local label Wooden Blue Records. [2] As the members left high school, Jim Adkins was part of a production company with Joel Leibow, co-founder of Wooden Blue. The production company listed itself in Maximumrocknroll's guide Book Your Own Fuckin' Life, which assisted bands, promoters, and venues to book shows across the United States. After being contacted by Christie Front Drive for a show, Leibow asked the band to do a split single with Jimmy Eat World. [3] Various major labels contacted the band and asked for a tape of their music, Zach Lind shared "We'd been called by a couple of majors, but it was nothing serious at all. It was like, 'Send a tape,' whatever." [4] A talent scout from Capitol went to a show to check out Sense Field; however, the opening act, Christie Front Drive, caught their attention. The scout asked them if they had new material he could hear, with the band responding by mentioning they had released a split with Jimmy Eat World. [5] Sometime later, a staff member at Capitol was in the audience, and approached them about a deal, Lind shares: "...the Capitol thing came out of the blue. We played a big benefit at the Nile Theater for a guy who got into a scooter accident, and someone from Capitol just came to the show. He saw us and liked us, and it kind of went from there." [4]

Jimmy Eat World had signed with Capitol Records in mid-1995, they signed a development deal with the label that included one album, which became Static Prevails, with the possibility for six more. [6] [7] Around this time, bassist Mitch Porter became a Mormon missionary, and left the band. [4] Carrier bassist Rick Burch, who guitarist Tom Linton had been best friends with since the seventh grade, replaced Porter. [6] When Jimmy Eat World was searching for an engineer to record what would become Static Prevails they came across former Drive Like Jehu drummer Mark Trombino. The band recorded two songs with him at Big Fish in Encinitas, California, Opener and 77 Satellites, both of which were released through record label An Industry for Outer Space on 7" vinyl.[3] The recording process was hampered by recurring clashes with Capitol executives who insisted the band rework some of their songs and write new ones. [8]The label wanted the band to write new songs in a rehearsal space in Los Angeles with the production team of Tom Rothrock and Rob Schnapf. Eventually a compromise was reached allowing for the band to work with their choice of producers, Mark Trombino and Wes Kidd of labelmates Triple Fast Action for the bulk of the album but having Rothrock and Schnapf mix the two songs the label wanted to release (Rockstar and Seventeen); the band were also given a producer credit. Capitol included the two songs on promotional samplers that were sent to programming directors at radio stations; the label said it was part of a development process it had for the band. The Dallas Observer said the sampler and a lack of promotion were seen as the label cutting its losses. [4] [9]

The band did pre-production at Mind's Eye Digital in Mesa, Arizona, with engineer Larry Elyea. Static Prevails was recorded in 1995 at Sound City in Los Angeles, and at Big Fish in Encinitas, California. [9] Billy Bowers and Jeff Sheehan served as assistant engineers at Sound City. [9] When Jimmy Eat World recorded Seventeen, it initially featured the chorus line "You're only seventeen"; however, when they realized it sounded too similar to a song by Winger, at which point Tom Linton changed the lyrics, and the band re-recorded it.[10] Trombino, who also acted as engineer, mixed all of the tracks, apart from Rockstar and Seventeen, in Studio C at Capitol Studios. Peter Doell, Billy Smith, and Steve Genewick worked as assistant engineers at Capitol. Rothrock and Schnapf mixed Rockstar and Seventeen at Sunset Sound, with Cappy Japngie serving as an assistant engineer. [9] Stephen Marcussen mastered all of the recordings at Precision Mastering, while Craig Aaronson served as the executive producer. [9]

The sound of Static Prevails and the issues with Capitol was, in part, due to a shift away from the pop-punk sound in the vein of NOFX, Rocket from the Crypt, and J Church found in their earlier work, and into post-hardcore and emo. [11] [12] [13] The band had picked up a penchant for slower, more melodic bands like Sunny Day Real Estate, Tortoise, and Seam, and their newfound influences showed on the album. [5] Drummer Zach Lind attributed this change in style to listening to Christie Front Drive, who they found to be "really melodic but still very powerful". [11] Lind played in a more aggressive and noisier style of rock-oriented drumming, with elements of his punk rock roots. [11] The album also marked a fairly even split on lead vocals almost evenly between Linton and Adkins. [14] Ted Simon compared Adkins' vocals to those of the Replacements' frontman Paul Westerberg. [4] In addition to playing the drums, Lind played the accordion and the concertina. Eric Richter of Christie Front Drive provided additional vocals on Digits, while Kidd played an acoustic guitar on Claire, Sarah Pont played violin, and Trombino contributed on the Moog synthesizer. [9] After the band handed in Static Prevails, Tom Linton shared that the staff at Capitol were "bummed [...] Just guys being like, 'Uh ... this is a lot different than what we expected'" [5] Jimmy Eat World toured the West Coast of the US in anticipation of the album between 1996-05 and 1996-06 [15]

Static Prevails, Jimmy Eat World's first major-label album was released on 1996-07-23 [16] [17]The cover artwork features a sideways photo of chimneys, taken on a rooftop in Denver, Colorado, by Ambient Band's Paul Drake. [9] [18] The original vinyl version featured different artwork, and included the bonus 7" vinyl of In the Same Room and 77 Satellites. [19] Capitol released Call It in the Air as the lead single in 1996 on a 7" vinyl, with Rockstar as the B-side. [20] Jimmy Eat World promoted Static Prevails with a mini US tour along the West; later, the band embarked on a tour with the Smoking Popes and the Figgs. [4] [21] There was a cross-country tour with Sense Field in early 1997. [4][22] A three-way split single that was released through Crank! A Record Company featured Jimmy Eat World, Sense Field, and Mineral. Sometime after this, Jimmy Eat World included Crush on a split single with Jejune that was released through Big Wheel Recreation. [23]