In the Same Room

In the Same Room 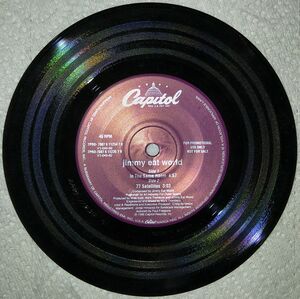 You always wrote for me, ego

Risk worth taking, risk worth leaving

Too big to stop

Too big to hold down

Trade up for the fast ride[2]

Pulling your teeth, you push away

Cancel plans, cancel them all

Check your breath for cold and hold on

No pictures left to burn goodbye to

The smell of ash and white walls blank

The drawers of paper all say one thing

The track listing for the first pressing is completely screwed up from how it should appear based on the studio album. The first pressing has album track “In The Same Room” appearing on the bonus 7″ intended for the bonus tracks, when it’s the 10th track on the studio that should appear as track 5 on the B-side of the record. The second pressing corrects this issue without the need for a bonus 7″ because the album was mastered properly, using the analog master, to stretch across to LP’s. So on the second pressing Static Prevails appears as intended, with the studio album appearing in order uninterrupted, with all the bonus tracks being tacked on to the end of the record on the C-side. the D-side of the second pressing blank and has no etching.[4]