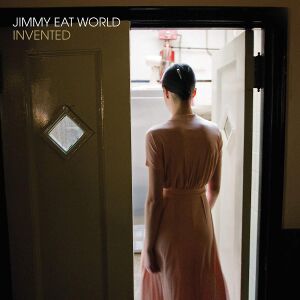 Movielike is track 5 of 12 on Jimmy Eat World's album Invented. It is one of several songs by the band with a closed compound title.

A face coming down in streaks

All alone with your things

Clean up and make my start

Not the way I hoped for

Give you time, let you think."

Don't know just what he wants

'Cause I'm all that I've got

But this time, I'm on it

This time believe it

This time you'd better believe it

Writing for the follow-up album to 2007's Chase This Light began after touring of the US[2], Europe[3], and Japan[4] followed by a co-headlining US tour with Paramore [5]. In 2008-06 bassist Rick Burch said they were working several new ideas but had "no plans to work with a well known producer on the record, but...that could change."[6] Around this time Jim Adkins, the band’s primary lyricist, reused an exercise he had used as the band was putting the finishing touches on Chase This Light. He would look at photographs and coming up with his own back stories for them. Adkins had recently discovered two books Cindy Sherman's “Completely Untitled Film Still” series and Hannah Starkey’s “Photographs 1997-2007” and became taken with the creation of his own back stories for each photo. “I would take about 10-15 minutes and blast through every aspect of the scene that came to me. Who was this particular character and who were the people in her life? How did she end up in this scene?” Adkins says, “It was intended to be a writing exercise -- much like an exercise lots of people employ every day called ‘object writing.’ The point wasn’t to get material for Jimmy Eat World songs, it was only to get my brain in a mindset for working. Eventually, though, ideas developed in those sessions did start creeping into songs. The album title ‘Invented’ refers to a song which I feel sums up the mood here,” Adkins adds, “but could also be taken more literally as this album is the deepest into character writing we have tried so far" [7]. Adkins said that "Later on in the day I would be working on my own songs, and some of the more interesting parts of those writing sessions started creeping in; enough of those ideas became what the other guys were excited about too" They estimated that about 85%-90% of the record was generated this way [8][9]

In 2008-08, drummer Zach Lind said the band were expected to be working on the new album imminently [10]. While working on the new material, the band embarked upon a ten-year anniversary tour for Clarity. Adkins said the trek had no influence on the forthcoming material but acted as "an overall confidence booster because it's kind of an amazing that ten years on people still like records we made in the '90s." [9] When making demos for their next album, guitarist Tom Linton said they purposely wanted to take a more stripped down approach, compared to the heavily-produced nature of Chase This Light, saying "we thought we might have gone a little bit too crazy on some of the production parts, like as far as adding more vocals and keyboard parts. So this time, we went with something more stripped down." [11].

While on the anniversary tour, the band became reacquainted with Clarity producer Mark Trombino, and decided to work with him once again for their forthcoming album. The band subsequently began recording tracks at their home studio and rehearsal space, Unit 2 in Tempe, Arizona. They would then send them to Trombino, who was located in California. Jim said it "had been a really long time since we had met. We talked for a while and it was good. We had already been working on material for Invented for a while, and we were thinking of hiring a producer to work with us, but we wanted someone with a specific skill set and willingness to work in a non-conventional setting.” The idea was the band would work out a song as much as they could on their own in their studio, Unit 2 in Tempe, Arizona and then send the multi-track recordings to Trombino in California. “Mark is a ninja with a computer,” Adkins adds, “After trying out a couple songs we knew he brought something really complimentary to the sessions. We would be recording the foundations of one song in Arizona as he was mixing another song in California.” [7]

Adkins remarked that Trombino would make a "mix of it and add production ideas and we would just kind of go back and forth like that." "Mark is the wizard at computers, and the history that we have working with him we don't have with anybody else, so it made sense on the familiarity level and the ease of working level." [9] [12] Although the band and Trombino spent little time together in the studio, Trombino joined Jimmy Eat World on a couple of occasions [13]. Regarding the overall recording process with Mark, Adkins stated: "It frees up a lot of our geographic restrictions for both the producer and the band; it's not just someone next door." [14]

Each, song on the album its own "closed narrative" [9] Adkins remarks that the album's title Invented referred to a track that he felt "sums up the mood here, but could also be taken more literally as this album is the deepest into character writing we have tried so far." [7].

One reviewer said "The mid-tempo sway of “Movielike” is like an O.C. theme tailored for a set of characters smart enough not to engage themselves in prescribed soap operatics" [15] another reviewer compares this track to other album tracks and previous albums " “Movielike” takes the airy, anything-can-happen energy of “Coffee and Cigarettes” and combines it with the towering pop of Chase This Light. Here we have a big, slinky chorus that’s classically Jimmy Eat World (“nothing movie-like/ and nothing magic”), Zach Lind’s percussion snapping and echoing off the song’s colossal edges. Like many of the songs on Invented, “Movielike” deals with a turning point in the central character’s life, when they’re positioning themselves for their next move. While the lyrics suggest a possible bittersweetness (“waiting to see a sign?/ then you’ve seen the best already”), the song’s shimmering ahhs and monumental bridge carry all the optimism and hope in the world. Alongside the twinkling “Littlething” and the traditionally massive closer “Mixtape,” “Movielike” to me has always embodied the sound of the winds changing and the leaves turning over in autumn, a representation of all the possibilities that come with a necessary ending...When you’re young and you’re still trying to figure out the person you’re trying to become, practically every day (hauntingly) feels like a new beginning. And that’s what I think about most when I think about Invented, how all of these characters were at points in their lives where they were making decisions that would determine who they’d become—from the frenzied, pressurized narrator of “My Best Theory” to the down-but-hopeful one in “Movielike”—and how I was also facing these decisions all the time. And like the central character of the title track, I too had a penchant for slipping into daydreams wherein all these choices would someday lead me where I wanted to go. [16]

A version in Simlish, a fictional language featured in EA's Sim series of games, can be found in The Sims 3 Generations Soundtrack (In Simlish) here: https://www.youtube.com/watch?v=nneNcgZMbSc [17] [18] [19]

On the week of 2020-03-21 Jim Adkins, filmed by Zach Lind recorded an acoustic version of this track from Unit 2 in Tempe Arizona though Facebook Live. This can be found here: https://www.facebook.com/watch/live/?v=1324974214358570&ref=watch_permalink before playing the track Jim mentions it would have been while they were playing the Download Festival in Sidney Australia. [20]