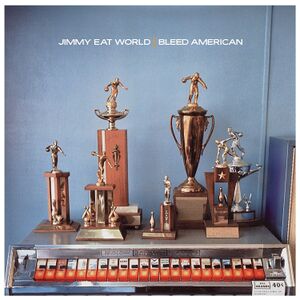 My Sundown is a track off of the fourth studio album by Jimmy Eat World, it is track 11 of the album Bleed American released on 2002-07-25, through DreamWorks Records.

I see it around me, I see it in everything

I said my goodbyes, this is my sundown

I'm gonna be so much more than this

I need you to show me the way from crazy

I wanna be so much more than this

Following the release of Clarity on 1999-02-23 [1] and despite critical praise and promotion, Clarity was commercially unsuccessful in a musical climate dominated by teen pop, and the band was dropped by Capitol in 1993-08. [2] [3] The band said Capitol was so "busy re-mastering and re-releas[ing] The Beatles [...] and Frank Sinatra" they "sort of fell through the cracks". [3] In 1999-09 and 1999-10, they embarked on a tour of Europe, with No Knife, and supported the Promise Ring for three shows at the end of 1999-10. [4] [5] After this, Jimmy Eat World took a break, during which Adkins started the side project Go Big Casino and played some shows, while Lind got married in 1999-11 at the same church where the band had recorded their '94 Demo Cassette. [6] The band celebrated the end of millennium with two shows in their hometown Tempe, Arizona. [7] After Capitol either shelved or refused to release the band's next record, Jimmy Eat World decided to leave the label, and Capitol was happy to let them go. [8]

In 2000-08 Jimmy Eat World released the compilation album Singles through the independent label Big Wheel Recreation, which included B-sides and unreleased songs from the band up to that point.[8] Later that year, they returned to Europe on tour, where Clarity was enjoying some success, especially in Germany. [8] [9] After this tour, they launched a new split, this time with Jebediah. [8] At that time, Jimmy Eat World distributed their albums independently while on tour in Europe. [10] Drummer Zach Lind recalled that the label "really didn’t believe in us. But in a way, that was sort of a good thing, because it let us take control of what we needed to do. We learned we had to do it ourselves, because no one else would do it for us." [11] When the band returned from their tour they began to think about recording their next album shortly after the release of Singles in 2000-08. [12] The sales from Singles and the proceeds from Jimmy Eat World's European tour helped fund the album's recording sessions. [9] Recording sessions began in August 2000 and took place in Los Angeles, California [8] in two studios: Californians Cherokee, and Harddrive in North Hollywood. The album was mixed in South Extasy Recording Studio in Los Angeles. [13] Bleed American was produced by Drive Like Jehu’s Mark Trombino [13] [14] who had produced two of the band's previous studio albums Static Prevails [15] and Clarity [16] and also produced Blink-182's breakthrough album, Dude Ranch. [17] The money budgeted for the record was insufficient. Trombino offered to work for free during the recording sessions, confident he would be reimbursed by the album's predicted commercial success. [18] The band also began seeing more commercial success from Clarity as it was praised by Blink-182's Mark Hoppus and Tom DeLonge; DeLonge's wife even had the band play their wedding in 2001-05. [12] [19]

Some of the songs included in Bleed American had already been written and recorded during the Clarity sessions, but the band felt they were recorded too late to include them in that album, including Sweetness. [12] [20] After recording sessions of Bleed American began, the head of DreamWorks Records' Artists and repertoire division offered to help the band. The band considered it, but it was not until a year later when they returned to contact him. After the band presented the material they had recorded, the label signed them. [20] Adkins reflected "Yeah, I've noticed we have a label behind us right now, it's definitely something new and exciting for us. That's definitely a change."[12]

The material on Bleed American was more accessible and aggressive than its predecessor Clarity, which had a more "layered, sprawling sound." [21] In regard to the stylistic approach of the album, frontman Jim Adkins said, “Things still got pretty gnarly in the studio as far as experimentation, but it was always to an end that was complimentary [sic] to the song. We wanted to really make sure that we weren’t doing things, like, just to put a wacky keyboard sound in. It had to be doing something constructive for the song.”[12] The lyrical composition in Bleed American also remained rather direct and straightforward. Mark Vanderhoff of Allmusic said that Bleed American didn't have any "16 minute songs," referencing Goodbye Sky Harbor from Clarity. Rather, he called the music on Bleed American "just straight-ahead rock & roll, performed with punk energy and alt-rock smarts." [21] The band collaborated with guest vocalists in several of the album's songs. Davey von Bohlen (of The Promise Ring) contributed vocals and the bridge in A Praise Chorus and Rachel Haden (of That Dog) lent her voice in Hear You Me If You Don't, Don't, Cautioners, and My Sundown. [12] [21] Jimmy Eat World makes references to several bands, albums, and songs in the lyrical compositions of Bleed American. A Praise Chorus, the final single from the album, contains lyrics from songs the band knew, such as "Crimson and Clover" by Tommy James and the Shondells, "Our House" by Madness, "Kickstart My Heart" by Mötley Crüe and "Don't Let's Start" by They Might Be Giants. [21] [12] [22] The title and lyrics of The Authority Song are a direct reference to "Authority Song" by John Cougar Mellencamp, and it also contains a reference to Automatic, an album by the Jesus and Mary Chain. [23] The Middle the second single from the album, includes a guitar solo that, according to Adkins, "is a tribute to Doug Gillard of Guided by Voices" and its lyrics speak about "fitting in" and self-acceptance of oneself. [12] [21] In turn, Sweetness was one of the songs that Adkins had more doubts about because of its lyrical content: "I just had this melody in my head and I was demoing it and singing it and kind of having a hard time with it. I almost didn’t bring it to the band because I was thinking to myself, ’I can’t just say nothing. I can’t just use all these sort of alyrical whoahs for this much of a song.’" [21] Bleed American reflects Adkin's struggles with alcoholism and substance abuse. On the tour prior to the recording of Bleed American Adkins suffered from panic disorder. [22]

Bleed American was made available for streaming on 2001-07-19 for members of the "Street Team" [24] before being released five days later on 2001-07-24 by DreamWorks Records. [13] The album artwork, showing a set of bowling trophies sitting on top of a cigarette machine, is taken from William Eggleston's photograph "Memphis". [25] The September 11 attacks on New York and Washington, D.C., which took place seven weeks after its initial release, and prompted it's re-released as Jimmy Eat World out of concern that its title could be misinterpreted following the September 11 attacks, the album was re-released with an eponymous title in 2001-12 [22] [25] [26] This may have also been inspired by the Clear Channel memorandum, where Clear Channel Communications (now iHeartMedia), the largest owner of radio stations in the United States, circulated an internal memo containing a list of songs that program directors felt were "lyrically questionable" to play in the aftermath of the attack. In addition, the title track was renamed Salt Sweat Sugar. [14] The album produced four singles: Bleed American (Salt Sweat Sugar), The Middle, Sweetness, and A Praise Chorus each managed to enter the top twenty of at least one US chart.  In addition to the album's singles, two EPs were released to support Bleed American. The first of these EPs, titled Good to Go EP, was released on 2002-02-22 exclusively in Japan and the second EP, titled The Middle/A Praise Chorus Tour EP, was a tour EP released in Australia in 2003-01. [13] On 2008-04-28, a deluxe edition of the album was released with a bonus disc containing several B-sides, acoustic versions, live versions, demo versions and previously unreleased tracks. The original album name and track title Bleed American were restored for this release. [25] In 2011-04 for Record Store Day the band released a deluxe three-LP vinyl set for Bleed American, which included some B-sides and rare tracks. [27]

On My Sundown the closing track of the album, Adkins sings "I want to be so much more than this," in a tenor muted, pensive, resigned voice. The song and album end on a fadeout [22] 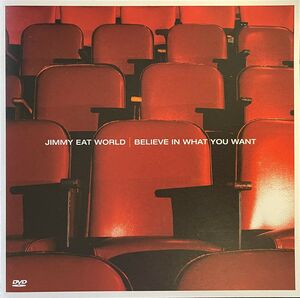 Believe in What You Want Jewel Case Version Cover

From the Believe in What You Want DVD - This track was recorded at Inner Ear Studio and was mixed and recorded by J. Robbins [28] [29]. Audio can be found here: https://soundcloud.com/jimmyeatworld/my-sundown-inner-ear-session.