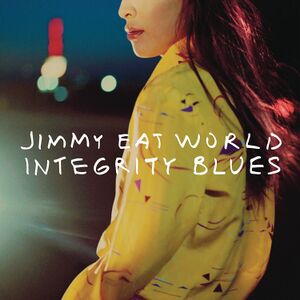 The album was announced with a letter from Jimmy Eat World/Jim Adkins which can be found below. The letter reflected on changing your life through positive self-talk. One reviewer described it as a "dreamlike, stream-of-consciousness explanation about what the phrase “Integrity Blues” means and what the album bearing that name is about." They go on to state "It’s looking at the differences between expectations and reality, accepting them, casting off the urge to play the victim, and learning how to define yourself and take your next steps based on the lessons you’ve learned. “Emotional injury of your own making” could be the title of an emo album. Certainly, the right to feel sorry for yourself has been the source of many, many songs over the years—some of them probably written by a band called Jimmy Eat World! But while Integrity Blues, like its predecessor Damage, could probably be described as an “adult breakup album,” it’s ultimately more about self-discovery and growth than it is about heartbreak. In weaker hands, that message might seem corny or overwrought — especially as the ultimate “punchline” of a record. But one gets the sense from Jimmy Eat World that this philosophy is really a part of how these guys live their lives. In a recent interview, when asked if he even liked doing press tours, Adkins said “You have to enjoy it, because it ends. There’s gonna be a day when no one cares, and they’ll be over it.” In a funny way, that response does a wonderful job of bottling up the overall meaning and message of Integrity Blues. Cherish what you have. Be thankful for what you’ve gotten to experience. Be grateful for the people in your lives. Nothing lasts forever, and on a long enough timeline, almost everything ends in some form of heartbreak. As Adkins told fans ahead of the release of this record, though, “Happiness is one of those fleeting finish lines.”" [12]

The album was preceded by release of lead single Sure and Certain in 20016-08, the band toured Europe and the United States, leading up to the release of the album. It was promoted with further stints in Europe and the US until the end of the year. Get Right was released as the second single in 2017-02, which was followed up by tours of US, South America, and Germany.

Integrity Blues was well received by music critics upon its release. AllMusic reviewer Neil Z. Yeung said it "shines in the dark with glimmering production, [and] a refreshed sense for hooks ... strik[ing] a clean balance between past and present". [13] Sputnikmusic staff member SowingSeason found it to contain "breathtaking melodies and intimate lyrics", with the "dreamy sensation and emotional relevance of Futures." [14] The A.V. Club writer Zoe Camp considered it their "glossiest release to date", witnessing the band "doubling down on the jagged hooks and dulcet-sung choruses ... festooned with their usual angst".[15] Consequence of Sound senior writer Karen Gwee wrote that the band "harness a distinctly darker, slower sound" with Integrity Blues, full of "oblique Adkins lines for the books". [16] Ultimate Guitar staff team said that if the listener was looking for "catchy lyrics and emotional melodies ... then you may be pleasantly surprised" as the music was "very easy to get into." [17] A typically negative Pitchfork contributor Ian Cohen said it was a "complete fabrication of a four-person rock band, a proudly produced record". He added that the album "finds itself sharing its dominant concern of using the [emo] genre’s inherent vulnerability and introspection to promote self-esteem rather than self-pity." [18] The Music writer Tash Loh begins with "a slow-burning build," eventually "fad[ing] through beat-driven tracks". [19] Sam Lambeth of Louder Than War wrote that the album was "a complete contrast to Damage's muscular minimalism", with Meldal-Johnsen "sprinkl[ing] his dynamic DNA all over the album’s tracks ... keep[ing] the record fun and exciting." [20] Drowned in Sound's Aidan Reynolds found it "a wonderful thing to hear Jimmy Eat World rediscover the form that stretched from Clarity through Futures... their dedication to honest, wide-eyed songcraft has resulted in their best album in over a decade." [21] Exclaim! writer Ian Gormely said it followed a "rough guide" of studio experimentation started by Clarity, while taking "some steps towards improvising a few lines." In other parts of the album, "the band fall back into their usual groove." [22] Another reviewer stated "What we get is an album that embeds fresh energy into well-worn grooves. 80’s synth, 90’s grunge, and early 00’s delay-effect fingerpicking wrap around sentimental lyrics that take their time, harmonizing only at the right moments, creating a twilight texture that blends and bleeds." [23] Ebony Bowden of The Syndey Morning Herald noted in reviewing the history of the band's released "It's the same band, but grown-up. The entire record has a sense of maturity and self-assurdness to it. It's their most introspective record.Produced by Justin Meldal-Johnsen, whose clients include Beck, Paramore and Tegan and Sara, Integrity Blues is a more symphonic and orchestral than usual." [24]