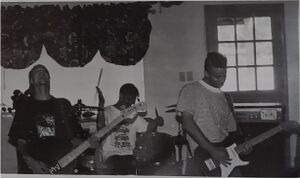 Battery Acid is track 1 of 6 on Jimmy Eat World's Orangewood Sessions Demos and was recorded at Orangewood Recording in Mesa, Arizona, USA. This track may actually be a Grimus track, however it was listed on the message boards and the Siberian Taste website as a Jimmy Eat World track. However the members of the band are significantly different from today's band. [1]