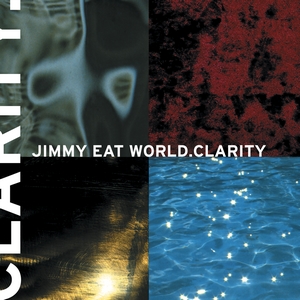 Just Watch the Fireworks is a track off of the third studio album, and second major studio album by Jimmy Eat World, Clarity. it is track 9 of the album released on February 23, 1999, through Capitol Records. However, this album has been released and repressed by Capitol Records, Nettwerk America, Big Wheel Recreation, Western Tread Recordings, EMI, Universal Music Special Markets, and SRC Vinyl.

Here, you can be anything

And I think that scares you

I think that scares you

Here, I've been here before

But only by myself

What giving up gives you

And where giving up takes you

I've had and I've been

And just enough space to fit

Said, said, said it out loud, but what do I know?

Said, said, said it out loud over and over

Said, said, said it out loud, but it did not help

Just enough so I can hear you

Said, said, said it out loud, but it did not help

Just enough so I can hear you

I'll stay up as long as it takes

As late as it takes

As late as it takes

As long as it takes

Jimmy Eat World had signed with Capitol Records in mid-1995, they signed a development deal with the label that included one album, which became Static Prevails, with the possibility for six more. [2] [3] The recording process for Static Prevails was hampered by recurring clashes with Capitol Records executives who insisted the band rework some of their songs and write new ones. [4] This was, in part, due to a shift away from the pop-punk sound of their earlier work, and into post-hardcore and emo. [5] [6] [7] The label wanted the band to write new songs in a rehearsal space in Los Angeles with the production team of Tom Rothrock and Rob Schnapf. Eventually a compromise was reached allowing for the band to work with thier choice of producers, Mark Trombino and Wes Kidd for the bulk of the album but having Rothrock and Schnapf mix the two songs the label wanted to release (Rockstar and Seventeen). Capitol included the two songs on promotional samplers that were sent to programming directors at radio stations; the label said it was part of a development process it had for the band. The Dallas Observer said the sampler and a lack of promotion were seen as the label cutting its losses. [4]

In early 1998-02, Jim Adkins and Tom Linton were a part of a six-person side project that would have consisted of "really quiet, really stripped-down stuff. Everyone's playing really simple parts, but it's layered, the kind of stuff like Bedhead does, you know, with their three guitars." Before the project came to fruition, the band folded, Adkins said "We never had one practice, Trying to coordinate a band practice with six people is just ridiculous. It was supposed to be a six-person band So I had six or seven songs that had vocals; they were finished, and I had no home for them." this included Rollerqueen , Table for Glasses, and Goodbye Sky Harbor and other tracks that had a big hand in shaping Clarity's sound. "In fact, Clarity might not exist if Adkins' other band did." [4] [12] [13]

In 1998 the band came to Los Angeles to do pre-production with Mark. "We holed up in an LA rehearsal spot. I think the rumor at the time was Rage Against the Machine just did a whole album in their practice room at the same joint. It seemed like such a pain in the ass having to load in and out for a daily or hourly jam session. We didn’t have a dedicated practice place but we could play almost anytime at Rick and Tom’s “club 700”. There wasn’t anything we could do to make the neighbors hate that house MORE." [13] Clarity marks the start of Adkins providing lead vocals and a majority of lyric writing (rather than Linton) with the exception of Blister [14] The band began recording Clarity with Mark Trombino in 1998-05 and1998-06, eventually sharing producer credit. [12] They were free to make it however they wanted without interference from Capitol. This is attributed to the label having no interest in the band by this point. [4] Recording started at Sound City in Van Nuys, California, with assistant engineer Nick Raskulinecz. [15] The band choose this studio because they had previously gotten good drum sounds on Static Prevails; however, due to its expensive rate, the band only recorded drum tracks there. "We had good luck doing drums for Static there so we decided to try it again" Adkins shared, "The slower tempo and low overdub count let the drums breathe. You can hear why the big room is the expensive room." [13] They then moved to Clear Lake Audio in North Hollywood, California where each track was pieced together to completion--one after another. Recording the overdubs from scratch allowed each song to grow into its own sonic personality. [16] During the recording process, the band slept on the office floor of their manager Jorge Hinojosa. [17] Believing that this might be the last album they might record, Adkin's explained "the atmosphere of the Clarity sessions was very encouraging for experimentation. Any idea was explored for some element to make the song better. I would think a song was totally finished and then one of the guys in the band or Mark would bring up an idea that really closed the deal. Tom and Rick had a hook up to get Bjork tickets one night. I really wanted to go but had to do some guitar thing that was holding up other overdubs. Later that night Mark told me to try and add some counterpoint vocals in the ending crescendo section. What happened is the “not asking of me anything...” section. I can’t imagine the tune not having that. And I still have never seen solo Bjork live." [13] With this mindset that they would not get the opportunity to make another album, and decided to included a variety of extra instrumentation. [3] This included the cello on Table for Glasses saying "if you aren't doing a lot, it doesn't take a lot to get a big dynamic impact" [13] and using two different drum sets for Lucky Denver Mint, a first for the band. They liked the effect, and also used two sets on Ten and Goodbye Sky Harbor. [13] Crush was re-recorded during the sessions [11] With the mindset that they might never get another chance, during the sessions for the band continued writing and recording demo material. For instance, Softer which would appear on the Jimmy Eat World (Extended play), was written half way through the album sessions and then finished back in Tempe, Arizona. [12] Trombino mixed the songs at One on One South in Los Angeles, California, with assistant engineers Ron Rivera and Justin Smith, and at Music Grinder in Hollywood with assistant engineer Dean Fisher. Brian Gardner then mastered the album at Bernie Grundman Mastering in Hollywood. [15] Susie Katayama assisted Adkins in writing and arranging the string parts for some of the songs. [13]

During the recording, CEO of Capitol Records Gary Gersh was replaced by Roy Lott in 1998. Gersh, who later became Jimmy Eat World's co-manager, felt the label's new regime was not equipped for developing a band like them. [18] Adkins said despite the album being finished, it had no immediate release date. [13] Unimpressed with its somber sound, Capitol appears ready to shelve the album. [2] In response, one of the the bands two Artist and Repertoire (A&R) Representatives Craig Aaronson, (the other was Loren Israel) suggested releasing an EP; he contacted Vinnie Fiorello of Less Than Jake, who ran the independent record label Fueled by Ramen, and supported the idea. [17] [19] [13] The band's second EP, Jimmy Eat World was released on 1998-12-14. [20] The EP included Lucky Denver Mint and For Me This Is Heaven from the then unreleased Clarity. Los Angeles-based radio station KROQ-FM began playing Lucky Denver Mint in early 1999-01, it was also picked up on other alternative and college stations. [21] [22] [23] As a result, there was interest in the song, and it appeared in the 1990 Drew Barrymore film Never Been Kissed. [23] After the boosted popularity from the EP, radio play and the movie pitch, Adkins shared "Bam! That week we got a firm release date for the album I have a strong suspicion Craig was tactfully keeping from us that the label had no intention of releasing Clarity. That is, until KROQ started playing it. Really why would they have kept us around? I think at the time Static Prevails had sold maybe somewhere close to 5k copies. One thing we learned early in the process recording and touring with Static was that the big labels were great selling tens and hundreds of thousands of records. They had no infrastructure to develop a band like us that had sold a single handful of thousands." [13] In addition to inclusion of of Lucky Denver Mint and a modified version of Seventeen in the Never Been Kissed soundtrack, the former also was approved for a music video, a first for the band. The Video was included on some CD versions of the album, the video was directed by Darren Doane, and is a "goofy" depiction of the band being defeated at various sports, such as basketball, ultimate frisbee, and ultimately succeeding at wrestling. [15] [24] [25]

The band promoted the album with local shows before embarking on a six-week US tour, including an appearance at South by Southwest. [25] [26] While on this tour, Adkins suffered from panic disorder. [27] Clarity was eventually released on 1999-02-23. [28] The album was released in Japan on 1999-06-09; this release includes the bonus tracks What I Would Say You Now and Christmas Card. [29] The band then appeared on the 1999 Warped Tour. [30] Despite critical praise and promotion, Clarity was commercially unsuccessful in a musical climate dominated by teen pop, and the band was dropped by Capitol in 1993-08. [31] [32] The band said Capitol was so "busy re-mastering and re-releas[ing] The Beatles [...] and Frank Sinatra" they "sort of fell through the cracks". [32] In 1999-09 and 1999-10, they embarked on a tour of Europe, with No Knife, and supported the Promise Ring for three shows at the end of 1999-10. [33] [34] After this, Jimmy Eat World took a break, during which Adkins started the side project Go Big Casino and played some shows, while Lind got married in 1999-11 at the same church where the band had recorded their '94 Demo Cassette. [35] The band celebrated the end of millennium with two shows in their hometown Tempe, Arizona. [36] Clarity was released worldwide on 20021-01-29 and was promoted with the 2001 singles Blister and Lucky Denver Mint. [37] [38] [39]

Just Watch the Fireworks began as a slower, ballad-esque type song, until Trombino suggested changing it to mid-tempo. [13] The final version is drawn out by Katayama's and Joel Derouin's string parts. [3] Upon its re-issue in 2007, Blender magazine noted Clarity "established a foundation for 21st century emo. Dozens of weepy bottom-feeders have tried to write mid-20s angst anthems better than the soaring "Lucky Denver Mint" or the delicately heartbroken "Just Watch The Fireworks"—but few have succeeded." [31]

Just Watch the Fireworks was the episode title One Tree Hill Episode 03x15, which aired 2006-02-15, The show named many of its episodes after songs or bands. [40]