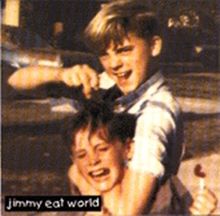 The album displays their early sound with guitarist and vocalist Tom Linton singing lead on most of the songs on this album (The one song on this album that is sung by Jim Adkins is Usery) [7] The album also marks one of the few appearances of bass guitarist Mitch Porter. The album was recorded at the Phoenix Recording Company with Steve Naugton who took care of engineering, production, and recording. Jimmy Eat World was mastered at Mind's Eye Digital by Larry Elyea [1]

The album cover photo features "what looks like a home movie still of Tom Linton’s younger brothers Jim and Ed Linton. in the still, Jim is noogeying his younger sibling Ed. Jim and Ed, who fought frequently,with Jim usually winning were the origin of the Band's name. After one incident Ed sought revenge by making a crayon drawing a fattened version of of Jim shoving the Earth into his mouth; the picture bore the caption "Jimmy eat world", thus providing the band with its name." [7] [5] (Note: this photo is featured on the 1993/'94_Demo_Cassette.) Jim Schroeder (Credited as "Schroeder") did the layout and design of the album and Craig Robeson did the remaining photography. The album is copyrighted to "Jimmy Egg Rolls" [1]

For the writing of this album and other songs of the era the band claimed as influences such pop-punk bands as Mr. T Experience (MTX), Radon, and Horace Pinker. [8]

The album had limited distribution and didn't chart.

In 2012, The A.V. Club's Jason Heller noted, "It's long been out of print, and there’s a good reason for it. It’s not terrible, but it doesn't represent what the band would become." [9] Heller goes on to note that Jimmy Eat World was emulating bands like NOFX, Face To Face, and J Church before finding their eventual sound [9]. Critics such as Dan Caffrey have reviewed the album in retrospectives that this album "definitely isn’t the band’s best, it’s by no means a bad record, even if it’s a bit 'outside' the rest of their catalog." [7] It's the most Tom Linton-heavy record in terms of his vocals which Caffrey noted have a "rough energy." Some hints of what to come where there such as "their penchant for having one song with an epic run-time on almost every album" [7].

One reviewer said of the album, "It’s gnarled, almost punkish aggression is closest to Static Prevails, but without the contemplation and atmosphere." [7]

An AV Club review for the Damage Album said "The ninth song, 'Reason 346,' hinted at the future. [It] found the band stretching out. True, it starts off as fairly typical pop-punk, but around the 2:30 mark the song pulls back, with just drummer Zach Lind and then-bassist Mitch Porter playing quietly. After a few seconds, Adkins’ voice joins, sounding like he’s about 10 feet away from the mic. One of the guitars returns, with clean single notes. An acoustic playing chords joins after that. Then, almost at the 3:30 mark exactly, everything kicks in for a cathartic instrumental coda. At that moment, it’s easy to see Static Prevails in the distance." [10]

This has not been re-pressed by the band, one writer who had interviewed the band about this album reflected "the band’s self-titled debut is so un-Jimmy Eat World that they decided never to re-press it. [7]