Damage is a track off of the eighth studio album by Jimmy Eat World. It was released on 2013-06-11, through RCA Records, Exotic Location Recordings.The band started writing new material in early 2012. The album is often described as an adult breakup album.

I hate the way I feel, but I don’t think I can change

I just breathe you each day

Are we only damaging the little we have left?

Both of us swimming in the same polluted mess

Are we too damaged now to possibly connect?

Of everything you say, it’s the truth that really hurts

But how could that be worse?

(are we only damaging, damaging)

Jimmy Eat World released their seventh album Invented in 2010-09-28 [1] which marked the end of their recording contract with DGC Records and Interscope Records, enabling the band to become "free agents" [2] As Invented's touring was ending in late 2011 they came in with the mindset of writing new songs and starting recording. "Our goal is to just try to get it out a lot faster than we have in the past. It’s usually taken three years to get a record released. We want to do it a bit faster this time around. Three years is a little bit too long, I think." said Tom Linton. [3]

The band began writing new material for their next album in early 2012. [4] In 2012-03, Jim Adkins debuted two new songs, Book of Love and You Were Good, during a solo show. [5] In 2012-07 Zach Lind revealed that the group were expecting to record within a month. [6] [7] The recording process for the new record contrasted the band's previous two studio albums, Chase This Light and Invented, both of which were done at the band's rehearsal space in Arizona. [8] On 2012-09-05 the group begun recording, at engineer and producer [9]Alain Johannes' house in Los Angeles, California [10] recording their next album with analog tape and Pro Tools [4] [11] [12]. During recording they took advantage of the variety of instruments at Alain's house including 12 string guitars [13], resonator guitars [14] and organ [15] [16]

more [17]. Recording proceeded very quickly with the band feeling halfway done in 15 days [10] and by 2012-10-05 they had finished and were waiting to mix the recordings. [18] [19] Mixing was finished by 2012-11-30 [20] [21] and mastering began in early 2012-12 [22]. Recording with analog tape and Pro Tools and as a result, Adkins said the sound was "raw and warm. ... There was less an emphasis on it being clean and perfect ... [and] more about the performance than it sounding pristine. And I think it feels better for what the songs are." [4] Discussing Johannes' contributions, Adkins stated that he had "the best ideas. For what we wanted to do he felt like the right guy. We have a better idea of what we want now, so we didn't need someone that was heavy-handed. We wanted someone to be more like a partner, an ideas guy with fresh ears." [8] The result musically was a power pop [23] and rock album [24] reminiscent of the band's own Bleed American [25]. Similar to Invented, which roughly revolved around a theme, Damage was "an attempt at making an adult breakup record", according to Adkins. The "consequences to what the characters are going through are more significant. ... I'm 37 and the world around me is a lot different than when I was writing breakup songs in my 20s. I tried to reflect that in what the lyrics are." [4] Akins intentionally wrote love songs, the kind that attracted him dealt with "adversity and emotional injury. If you have a happy song about how happy you are, ... [t]here's no story there for me. I can't have any empathy." [8] He compared the process of writing the lyrics to that of the band's third studio album, Clarity, stating: "...that's how I approached a lot of emotional things in those days. It's the observation and experience of the world around you, and you develop the ideas from that. ... [With Damage] I'm asking myself the same kinds of questions about things, it's just that I'm in a different place in life, a completely different environment." [26]

On 2013-04-03, Damage was announced for release in June. In addition, the album's track listing and artwork were revealed [27]. The cover, created by Morning Breath Inc, uses a minimalistic approach: an umbrella that is radiating sunlight against blue fog [28]. In 2013-05, the group embarked on a brief US tour, dubbed the Arizona "Home-State" Tour and began streaming I Will Steal You Back, which was followed up by a lyric video, and then a video. [29] [30] [31]Followed up by Damage which was announced as a Record Store Day single for 2013-04-20 release [32] and made available for streaming on 2013-06-03 through the band's website [33]. The album was released on 2013-06-11, through RCA Records, Exotic Location Recordings. [15] Regarding RCA, Adkins noted: "There's a lot of people there we've just crossed paths with over the years and who have been really supportive of us even if they didn't have a stake in how our records did." [4]

The title-track sees the narrator witness his partner leave amidst broken promises and big expectations. According to Adkins, the song's bridge section was based on an idea he had since 1998. [34] reflecting on the bridge Jim Adkins states "The bridge section on that is probably the oldest thing that exists on that record. That came from an idea that I had maybe in '98 that for just whatever reason never ended up as a fleshed out part. In some ways things have kind of come back to a simpler mindset. I think we sort of focus on what feels right and trusting our judgement and walking away from it when it's done” [35]

On 2013-04-03 the album was announced, including track listing and artwork, for release in June.

On 2013-04-20 a 7" vinyl single for Record Store Day was released, which also included a performance at Fingerprints Music, Long Beach, CA [36]

The song was then played throughout the brief US tour, dubbed the Arizona "Home-State" Tour.

On 2013-07-23 the group appeared on Conan performing the track. alongside We Are Never Ever Getting Back Together (Taylor Swift Cover)[38] 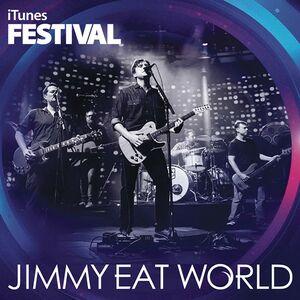 This is a digital only release of a live recording from the iTunes Festival (now known as the Apple Music Festival) held at The Roundhouse, Camden Town, UK on 2013-11-11. See iTunes Festival: London 2013 for details.