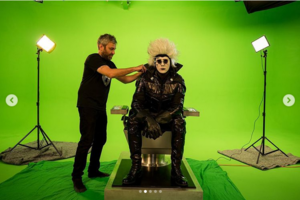 The 555 music video is a concept video from the band Jimmy Eat World and their album Surviving. The video was directed by Jim Adkins and Mike Gill [1] [2] The video was inspired by Rick Springfield’s “Bop ‘Till You Drop” video [3] [4]

When Gill passed away in 2022 05 Jim Adkins shared a photo of Mike behind the camera directing this video on an Instagram post, where he goes on to describe the video as "his favorite" the band has produced. [5] The Something Loud (music video) was dedicated to Gill. [6]

In an interview with The Ringer, Zach Lind the theme is "'a science-fiction postapocalyptic nightmare filled with clones and an evil galactic master,' played by Jim Adkins, looking like he fell face first into a bag of bleached flour." [7] Also involved were Michael J. Epstein, Sophia Cacciola, make-up artist Renae Goodhew, Steve Javors as grip on the production staff, and Mr. Mark Jude Sullivan as a minion. [3]